During my visit to St Mary’s College in Hull, I had the opportunity to observe a Year 13 Performing Arts class. This group of Year 13s are studying BTec Performing Arts and their course is made up of drama, dance and singing classes. Many want to go on to pursue careers in the performing arts, including doing musical theater. In this particular class, the teacher was using movement to help students understand The Crucible, the new text they were studying.

The class begins with a warm-up, “to get rid of the giggles”, and then the students watch a video of a group of people moving without ever breaking contact. In the video, people come in and out of the sequence but always take hold of someone’s hand before joining. The transitions are really smooth. It looks like a dance. The actors are always in contact as they move. There are hugs, forehead touches, holding each other in a head lock. When the video finished, the teacher asks the students to guess the types of relationships that might have been in the scene. “We learnt a lot by looking at contact. Lots of elements can come from movement or choreography,” the teacher explains when they are finished discussing the various relationships they saw. 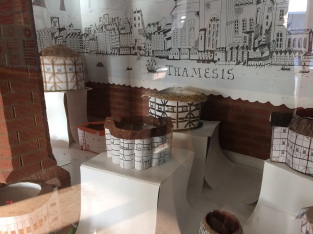 The class then divided into groups and started to come up with their own sequences. The only instruction the teacher gave is that the contact should be between friends or family – so closer contact than greeting a stranger say – and that each person in the group should be involved in two movements.

In one group, two girls start with a hug and then others come and transition the hug into a different form. Now there is a new hug formed. There is a building of sequences. “At the moment, this doesn’t have a story, it is just movements, choreography,” the teacher tells them. The students move around in their groups, creating transitions from one pose to another. The teacher watches and gives advice, suggests things – Are you going to… Just watch that… Maybe you could… Then she tells them to think about transitioning out as well as into the pose. What happens when you leave? The students do the sequences multiple times until they are fluid, including their entrances and exits.

“We have to bring this back and think about how we can use this in The Crucible”, the teacher prompts. She explains that one of the play’s main themes is power and manipulation. In this time period, women were subordinate to men. ‘Goody’ meant good wife. Abigail is unmarried but had an affair with a married man. She wants the students to assign a character to each person but to do this randomly. “Don’t change the choreography”, she instructs. She explains to the students that embraces can change depending on strength and posture. The characters they need to assign are: Abigail, Proctor, Elizabeth, Mary W, Parris/Danforth. “Embraces might become something else”, the teacher advises. The groups reconvene and choose characters. They now practice the transitions and movements as their characters. The teacher talks to them as they move through the transitions, asking about how their characters now affect these movements.

“How does Elizabeth feel about Parris?” the teacher asks one group. “Be a bit more on-looking so we get a sense of who you are observing and why,” she tells another. “Don’t be frightened to push these characters a bit more, slow things down”, the teacher advises the class.

After they have had an opportunity to rehearse in their new characters, we watch the two groups in turn. The teacher asks them to go through the sequence twice. Afterwards, the students guess who was which character. “How did you decide?” the teacher asks. “Facial expressions”, “movements”, “who took control at the end”, the students answer. “You did a forceful embrace and it was really quick. He was impartial. It was like you needed support,” one student observes.

The teacher explained to me that the purpose of this class was to allow students to understand complex relationships and the complexity of the play, without being overwhelmed by the text. It was very interesting to see how the movements morphed to reflect different relationships, even though they had been randomly designed in the beginning. With each performance it was easy to spot characters through their movements or facial expressions. The lesson made me think about how we use such knowledge in real life, reading people – their expressions, their movements, their body language – in order to understand them. Drama is a way to learn this knowledge.