This post is written by Lexi Earl, on her visit to Treviglas Community College.

What do you think of when you think of a theatre company? Do you think literally of a theatre? Of performers? Of stage design, sound and lighting? Of plays you have seen that have stayed with you? I certainly do. But while I was visiting Treviglas College in Newquay, Cornwall, I was shown how narrow my understanding is of what theatre companies potentially might do. On the Friday of my visit, Sam Colborne, the Head of Drama, was also hosting the Kneehigh Theatre Company – a world-renowned theatre company from Cornwall. But Kneehigh were not there to deliver a performance, or a workshop on acting or directing. They were there to record stories for their new app, and to provide the young people with a workshop on social media, and its use in a performing arts company. 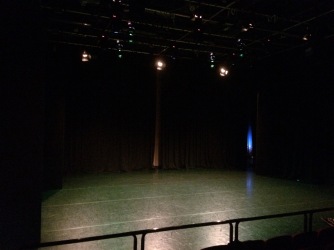 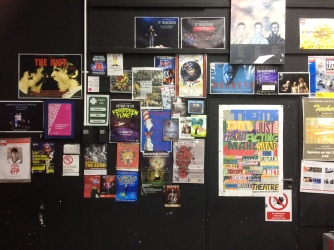 The app Kneehigh have developed is called “Walk with Me”. It provides visitors to Cornwall with a walking tour of a local area – so far the company has done walks for Megavissey and St Austell, with the students from Treviglas actively involved in the development of a walk for Newquay. There is a walk for Bodmin underway too. While you walk around the area, following the map, you can listen to local stories, legends and myths. In the case of the Newquay walk, this is narrated by the students and staff at Treviglas College (alongside performers from Kneehigh). As well as recording the various stories throughout the day, the students and Kneehigh talked about the purpose and use of social media from a theatre company perspective.

Charlotte Bond, the General Manager and Director of Rambles, explained to the students that marketing and communications are hugely important for performers, because people need to know about, and share in your show. If you’ve rehearsed and have your performance ‘super polished’, she explained, but then no one comes, that’s it. You’ve lost your opportunity. It is not like a piece of fine art that you can display and then leave. “The performance happens there and then, in the moment,” she told the group. Dann Carroll, the Communications Assistant, led the workshop and explained how the marketing for the app would work. He explained that one of his main jobs is social media and so they the focus of the workshop was on how Kneehigh use social media. He ran through the various platforms and asked what platforms the students made use of. Kneehigh mainly focus on Facebook, Twitter, Instagram and YouTube. He told the students that you should focus on one to three platforms for engaging with the audiences. “Once you have an audience, you have to keep that audience”, he explained. The company want to keep people engaged in the app.

Dann explained about posting; selling; and creating engaging contact, including posting items specifically for ‘friends’. He showed students the Kneehigh marketing plan for the year, with the show deadlines on. Then he showed them the social media plan. “This spread sheet organizes the platforms, shows how often you’re posting, and what is being posted. To keep the audience engaged, you don’t want to keep posting the same things. It is really important to plan what to put on social media,” he told the students. Dann talked about knowing the Facebook algorithm and understanding what is being championed at any particular moment. So, for example, Facebook doesn’t like links in posts. Dann explained that he doesn’t look for likes on Instagram. Rather, he is looking at what people are saying and the comments they leave on a post.

The idea with the app then is for people to share their own stories while doing the walk; for example, taking photos on the walk, and then uploading it to a platform with a specific hashtag. Dann explained that you need to consider paid social media because it is cheap and can have big engagement rewards. Kneehigh use paid advertising for shows to target specific audiences. For example, they have used paid advertising to target an audience for their ‘Friends’ scheme.

The group then moved on to discussing things that do not work on social media – blurry pictures, or not posting enough, before they began to build an audience profile for the app. They thought about how to describe the app [innovative, different, clever, compelling] before talking about the type of person who might download and then use the app. They needed to create a character that they could then design their marketing campaign around. 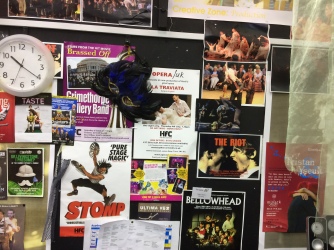 This was a most unusual and innovative collaboration between the school, the students, and the theatre company. The experience of observing the workshop between Kneehigh and the students has stayed with me while I’ve been thinking about the place of arts education in England. It provides a great example of how theatre companies are innovators, forward thinkers of how they might contribute to their local communities and to their local economies. Companies like Kneehigh prove how theatre is not just about acting and performing.