I have been immersed in Shakespeare for the past few weeks. Many of the schools I have visited as part of our Year 3 research visits have been RSC partnership schools and so I have been watching students learn sword-fighting, talking to young people about their participation in productions of The Tempest, or observing them devise stage directions for particular scenes. This is all fairly usual daily work.

A few weeks ago, while visiting Towers School in Kent, I had the opportunity to watch several groups of students perform scenes from different plays as part of their last English lessons before half-term. Becca Gardner, an English teacher and leader of the RSC work at the school, explained that allowing students to perform was a lovely way to end their 6-week study of a particular play.

The Year 7 classes had been studying A Midsummer Night’s Dream. This is one of my favourite plays, and they were performing one of my favourite scenes – the play within the play, put on by The Mechanicals, that can be a masterful portrayal of comedy. I have seen A Midsummer Night’s Dream performed on several occasions but watching the Year 7s understand the comical aspects of the scene and master the language was truly enthralling.

The class took place within the school hall, which has a large stage and elevated seating area for the audience. The students were not intimidated by this theatre size nor by performing in front of their peers. They were all given about 15 minutes to rehearse the scene in their groups, and were then invited to share their performance with the class. 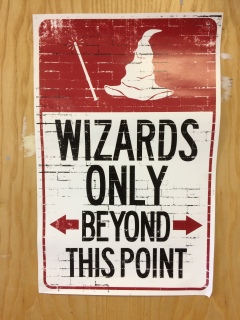 During rehearsals, the room was full of movement, laughter, dramatic falling, negotiation, exclamations, pulling, pushing, dashing, lying on the floor… On stage, the students were a joy to watch. In one of the first performances, Wall had to be bodily carried off stage by the other actors, so heavy was his imaginary wall costume. In one group, Moonshine was pulled around the stage by an imaginary dog, interrupting other scenes as he dashed past. Then he stood enthusiastically in front of Pyramus who was trying his best to deliver his final speech as an eager Moonshine held the ‘moonlight’ in his face. Eventually Pyramus grew so frustrated that he shoved Moonshine out of the way so the audience might watch his dramatic death.

In another group, Wall spoke in a high squeaky voice and took ballerina steps off the stage (going the wrong way), much to his audience’s amusement. In this group, Thisby whispered audibly to Pyramus in the final scene, “just die already!” One group had actors wandering around looking lost, even after the Wall had started to speak, as if they weren’t quite sure whether the performance had started or not. Pyramus died, then awoke and died again, then woke again and died once more. Even as they were taking their bows, Pyramus remained in character, collapsing and dying once more. They ended with a forlorn Moonshine on a quest for his lost dog. “Seriously, though,” Moonshine asked the audience, “has anyone seen my dog?”

I laughed so much during these performances that tears ran down my face and the young people in the audience looked at myself and Becca (who was also in tears of laughter) with wide, surprised eyes.

The students use of asides, gazing knowingly at the audience, physical movement, expressions, and complete immersion as The Mechanicals playing Pyramus and Thisby spoke to a deeper understanding of the play, and the power of comedy. They all really understood the humour in the scene. None were intimidated by the language. They were completed immersed in the lesson and fully willing to embrace the ridiculousness of the play.

What a wonderful way to end a six-week block of Shakespeare lessons! If anyone tells you Shakespeare is boring, or serious, or requires a lot of annotated texts to understand, I urge you to send them to Towers School, where the young people will quite happily prove you wrong.