On my trip to Ricards Lodge High School in Wimbledon, I sat in on a Year 11 drama class with teacher Jack Ralton. Upon entering the drama studio I was surprised to see the picture of Suffiyah Khan standing up to an EDL member at a march in Birmingham, which had been doing the rounds in the newspapers only the week before. The picture was labeled ‘the stimulus’ and Jack was using the complicated story as part of the Year 11’s work on narration. The girls had already spent time looking at the incident, and exploring the subject of narration in drama. The purpose of narration, as the class discussed, is for the performance to be ‘narrated’ by someone, while the actors act out the scene. The actors do not have any lines in this type of performance.

Jack explained that the class were going to use masks in their performances so that they did not need to think about their facial expressions. They could focus on their gestures. Each girl already had a character and had written a backstory for that character. This lesson, they were going to work in groups to perform their stories using masks, working on the change over of story from character to character, and ending at the scene in the ‘stimulus’ photograph.

Jack spent some time explaining how the masks should be used in the performance. He said, “you’re creating the illusion of a different character so don’t put your mask on facing the audience. When you turn around, be totally in character. Your gestures change, your physicality changes”. “Try not to have too much side profile. Try to be really face on to the audience”, he advised. He then told the students not to touch the mask with their hands too often as this looks alien to an audience. It is odd to see a real hand against a fake mask.

The girls divided into pairs to practice putting on and removing the masks. They then got together in their performance groups to work out transitions, taking masks on and off, and sorting out the acting. While the girls rehearsed, Jack moved around the room watching, making suggestions and advising. “It is about quality, not quantity”, he said.

We then came back together as a group to watch the two different performances. The girls had all chosen masks based on their character. There were four girls in each group: two EDL characters, one policeman, and the character of Suffiyah. Jack told the class that while they watch they should be thinking about:

We watched the first performance. I found the way the masks added to the performance fascinating. The girls used exaggerated gestures that fitted well with their mask’s ‘expression’. They had also thought of complex backstories for their individual characters – the policeman’s narration in the first performance mentions the police budget cuts and in the piece the policeman has to take the bus to the protest. There was a scene with each character that explained how they ended up at the march and in that particular scene (‘the stimulus photograph’). After the performance we discussed it as a group. 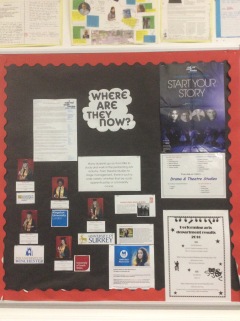 Jack complimented the performers. “An excellent piece of work. I really like the over exaggerated gestures. They add to the comedy”. He then asked girls and a second teacher what they thought. “There is a comedy element, which is an interesting stylistic element,” the second teacher commented. “The flow went really well,” said one student. “The police officer had really low status, that was a good mask choice,” said another. The class talked about how the police only have power because we, as a society, give it to them.

Then we watched the second group perform. This group also had interesting narratives for their characters, as well as comedic elements. The comedy in these stories is particularly intriguing because at first glance, the stimulus picture is serious, and deals with a lot of complicated issues around identity, ethnicity, and race. The class discussed this performance. “They had a good choice of masks,” one student said. “The police character looked worried, nervous,” commented another. “When you do actions that contradict the mask face, that creates comedy,” the second teacher advised the class. “It highlights political issues, it shows the powerful choices people have to make,” noted a third. “It was done really well.”

The class then moved on to examining ‘chair duets’ performed by Frantic Assembly, which would form their next task, still based on their current characters. The girls’ deliberation of their characters backstory was incredibly fascinating to watch. They approached these complicated backgrounds with maturity and thought, not letting their personal opinions get in the way of their dramatic performance. It was inspiring stuff.