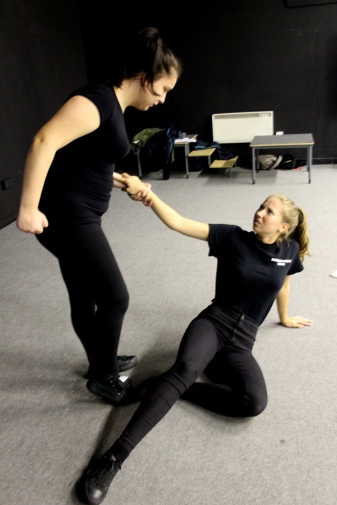 In this post Anton Franks reflects on his visit to one of the RSC partnership schools:

Arriving at Ark Helenswood Academy lower school site on a sunny June morning in Hastings, I am met by Niall Whitehead, a drama teacher and the Director of Performing Arts in the school. He’s a very busy man – overseeing drama, dance, music and PE and teaching, spending his days whizzing between Helenswood’s two sites and the Sixth Form Centre, located at a neighbouring boys’ school. Walking with him down the corridor to his office, I’m struck by wall displays of performing arts projects. Niall is involved as a lead teacher in RSC’s LPN, but has in the past participated in Shakespeare Schools Festival. He’s impressed by the high quality of the RSC’s education work and believes it has real benefits for the students. It emerges that Niall is also a founder and key member of Hastings and Rother Arts Education Network (HRAEN). During the summer vacation, Niall also runs a youth theatre group, devising and performing theatre at a local centre, The Stables.

Before rushing off to another site, Niall introduces me to two Year 9 students, Ellie and Sirsha, who’ve arrived to escort me on a tour of the school, before I meet again with Niall at lunchtime. The girls are articulate and animated as they guide me swiftly around corridors, peering into classrooms and skating past wall displays, many of dance performances presented in and out of school.

The girls tell me that the school offers A-levels in both Dance and Drama – not many schools do that. In Year 7, they had Dance, Drama and Music lessons every week. Since Year 8, though, the performing arts are on a half-termly rotation, with one lesson of each every two weeks. Ellie and Sirsha are clear that ‘behaviour in drama and dance is much better’ than in other lessons. ‘It’s much more about group work and you really have to concentrate on what you’re making, with no room to switch off and dream that you have in other lessons,’ they tell me. Later, in a group discussion, a Year 11 student echoes this point, ‘It’s a different kind of hard work… It’s equally hard work but because you’re having fun you don’t feel it’.

The discipline of working creatively with others comes up in discussions with students, because ‘you have to rely on each other much more.’ Lessons in the performing arts, they think, ‘are very different from academic lessons. They [teachers] really encourage you to be creative.’ And the opportunities to exchange and trade ideas and to work towards an artistic product in performing arts lessons is valued by the students – ‘You bounce ideas off each other… everyone brings something. It’s more that you’re working together towards a common goal, rather than relying on one another.’ How working in the performing arts is different from other lessons arises pretty quickly in discussion with Sixth Formers, too. Performing arts lessons are ‘Somewhere you can let go, in normal lessons you’re very restricted in what you do. You can express yourself in an arts lesson.’

Returning to the conversation with Ellie, she is enthusiastic about doing Shakespeare in drama. In English it’s ‘hard to understand, but easier to understand and work with in drama.’ (Niall tells me later that Ellie was involved with the Shakespeare Schools Festival that he was leading on in Hastings when she was at primary school in Year 6. He thinks it’s a main reason why she so wanted to come to Helenswood.) Talking with a group of Year 10 girls the following day, one tells me, ‘It was nice to do it for ourselves, because in English you’re given the exact interpretation and analysis, and you have to get the right answer. But in drama we brought our own ideas and our physicality, and characters’. Another chips in, ‘If you’ve performed it and become that character, then you understand them more.’ Getting inside the mind and skin of a character is also something that arises in discussion with Sixth Formers – ‘There’s an element of almost psychology… finding out and understanding why people should act in certain ways…’

All in all, it becomes clear over the course of my visit that performing arts teachers and students at Helenswood make vibrant contributions to the cultural life of the area. In the past year alone, for example, they’ve been involved in 1066 anniversary and in the opening of the newly refurbished Hastings pier. Elaine Vanner later shows me a YouTube video of her A-level Dance group dancing on the pier with a group of construction workers in a piece they choreographed, performed and filmed in a single day.

Through work in dance and drama with the teachers in the Performing Arts faculty, Helenswood appears to have become quite a ‘hub’ institution for the performing arts in Hastings